Gender Identity is Not a “Behavior” Needing Repentance 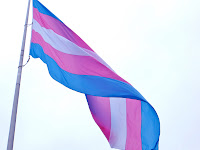 The story goes on to explain how a former transgender student at Cal Baptist University (CBU) was suing the university for wrongful expulsion because she was transgender. The university counters that when the student registered, she committed fraud by indicating she was female instead of male, her birth sex.

I guess Biola University thinks it prudent to develop a transgender policy posthaste to mitigate a similar fate, should a transgender person infiltrate their ranks.

The problem for CBU, according to the article, is that though they have strong anti gay language in their statement of faith, they have nothing addressing gender identity issues or transgender persons.

Maybe this is all Biola wants to ensure, that if they ban homosexuals, they better make sure they also ban transgender persons. I would hope, however, that what the will do is include language that protects and affirms persons who are LGB and T. Here’s hoping.

As an aside, I commented on the article and someone responded to what I said in part. The commenter reduces gender dysphoria to a behavior and a temptation; the parallel used is an alcoholic and drinking. Then goes on to suggest a Christian is called to refrain from acting on temptations, because, Christianity is a religion of self-denial. The implication is that one needs to repent for wrong behavior.

Hell, I repented and lived in denial for the forty years as Christian prior to transition. I'm getting ahead of myself. Here, for your reading pleasure is what this person said, who, by the way claims to be a licensed mental health counselor. God help us.

I understand that real people struggle with the issue of gender identity (as Lisa has so kindly opened up about), and I don't want to denigrate anyone who is. I cannot imagine having difficulties in this area (although I surely have them in many other areas), and I can only empathize. Nevertheless, Christians believe that whether or not we engage in or refrain from certain behaviors (e.g., watching tv rather than reading, eating lunch at noon rather than 1, etc.) is something that is up to us, and as such we are responsible. The same direct control doesn't generally apply to things like our feelings or beliefs or impulses (although we can perhaps over time indirectly affect change in these areas); as such, we are not responsible for these.

As an example, we don't hold an alcoholic responsible for desiring alcohol, but for getting drunk. Wanting is a mere temptation, but acting is to fall to the temptation. As Paul said in this regard, "No temptation has overtaken you that is not common to man. God is faithful, and he will not let you be tempted beyond your ability, but with the temptation he will also provide the way of escape, that you may be able to endure it" (1 Cor 10:13). This passage applies to transgendered individuals (see Deut 22:5) as well as anyone else who struggles with sin (i.e., everyone). One cannot directly control (and hence are not responsible for) their feelings, beliefs, or impulses, but one can control (and are thus responsible for) their behaviors. Cross-dressing is a behavior, as is identifying oneself as the opposite gender. And these things we are responsible for. While the impulse may be persistent and near ubiquitous, it does not determine how we act--only we do.

Look at Christ, the only one who was never overcome by temptation (although tempted plenty; Heb 4:15). He believed the truth of 1 Cor 10:13 (clearly enunciated by Paul after the fact), and His struggle came even to the point of blood (Lk 22:44, cf 28, Heb 2:18). As Peter exhorts us, "let those who suffer according to God's will entrust their souls to a faithful Creator while doing good" (1 Pet 4:19). And let us all internalize what James says: "each person is tempted when he is lured and enticed by his own desire. Then desire when it has conceived gives birth to sin, and sin when it is fully grown brings forth death" (James 1:14-15).

Christianity is a religion of self-denial (Mark 8:34-38). Not because humans are worthless or because matter is evil, but because we are trying to be like our God who exemplified self-giving love in Christ (Phil 2:5-11). If we ever hope to be in community with the triune God of love we must learn to be like 'them' in all things, loving Him and one another over self. Let's let Him worry about loving us, and let us worry about loving Him (Matt 6:25-33), even if that means suffering: "For I consider that the sufferings of this present time are not worth comparing with the glory that is to be revealed to us" (Rom 8:18).

I'm getting tired of this kind of thinking. Actually, it was the way I thought for years; maybe that is why I am so tired of it. Nevertheless, this was my reply to this person.

Unfortunately, you are not alone in having this erroneous and simplistic understanding of a real medical condition.

What prayer, fasting, memorization of scripture and everything else in your Bible tool kit could not do—cure my gender dysphoria—medical and surgical transition did. I have not experienced dysphoria since I began my transition in July of 2008.

Imagine any other medical condition I could have suffered from since birth for which I had prayed all my life for God to fix, and imagine that now, for the first time in history doctors could treat with medications and surgery, would you tell me to not avail myself of this treatment but to rather rely on the grace God promised would be sufficient for me? That is how absurd your argument is to my ears.

The reality is, whether you like it or not, that even God himself—in the person of Jesus—acknowledge that sexuality is not purely (male and female) binary when he spoke about those who are born eunuchs from their mother's womb. Interesting God (Jesus) encapsulated his comments with the caveat and challenge that not all would be able to receive his words.

I pray that He allow you to wrap your brain around it, in the same way Philip (who had three daughter) obviously had by the time he met up with the Ethiopian eunuch.

Have you ever wondered why the Holy Spirit may have prompted Luke to include the fact this person was a eunuch in this account in Acts? He could have simply said an "Ethiopian official" without any mention of this person's sexuality.

I suspect the fact the person was a eunuch must have struck Philip as significant, especially in view of what Jesus had said about eunuchs and the fact that eunuchs were considered ceremoniously unclean. Yet, this person made this treacherous and dangerous journey to Jerusalem for the Passover, knowing that he/she would simply be an onlooker, forced to stand on the side lines.

How did Philip know this person was a eunuch? The fact is that the bodies of persons who are born inter-sex (today's term) don't always mature with the expected male or female secondary sexual characteristics. Therefore, it is quite possible that this person presented in a very androgynous way, did not have facial hair or a deep voice. We don't know. But again, that fact this sexually other's sexuality is part of the biblical record is significant from the point of view of inclusion, which would be the hallmark of the church.

No longer would people be excluded from full participation on the basis of being male, female, Greek, Jew, slave or free. Philip obviously had a paradigm shift by the time he was called to meet up with this person on that dusty road to share the gospel and baptize him/her as an equal member of the body of Christ.


Now it's your turn, say something...leave a comment. Tell me you stopped by. Pleeease.