A Christmas Eve story and a photo—seven years later.

Story: Excerpt from Chapter 27
“The Day the Music Stopped”
Transparently: Behind the
Scenes of a Good Life.

This was the 7th Anniversary of our shopping trip to Costco on Christmas Eve, which we now celebrate by going shopping at Costco on the 24th, followed by brunch! Photo: Selfie with Duncan at the Richmond, BC Costco, Dec. 24, 2014. Here’s the back story. 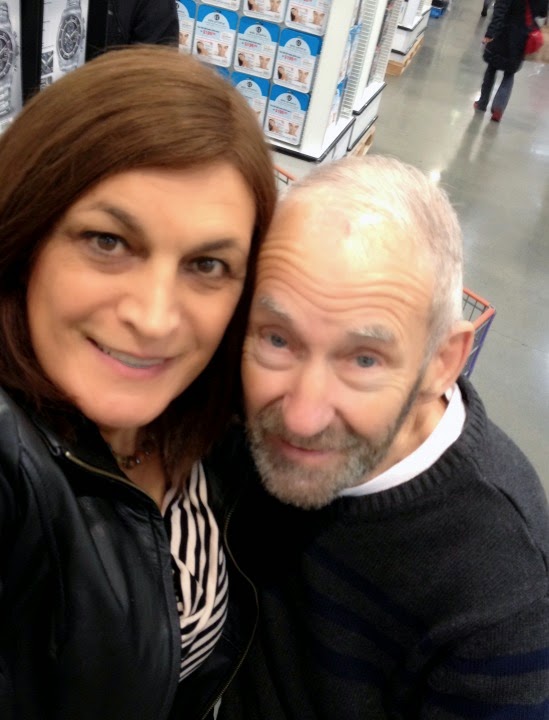 How and when I would begin transition—that was the $64,000 question. I still did not have the confidence to present as a female when I started to disclose to people. My friend Duncan convinced me one day to come visit them as Lisa. His argument was that I needed to start presenting, and what better place than in the safety of close friends. He wouldn’t take no for an answer, insisting this was something I had to do.


There was a lot of truth to what he was saying and I concluded he was right about my feeling safe with them. I finally did this one Friday afternoon in early November, 2007. I wore a long-sleeved top with a crew neck, a black skirt, clip-on earrings, and a wig I had recently purchased for $45. I found some low-heeled mules my size at a shoe discount store to complete the outfit.

I will give Duncan and his wife the benefit of the doubt, but I think they were just being polite as they received me that afternoon. As we chatted and had tea, Duncan took some pictures, but I must admit the adrenaline was flowing fast and furious, so the experience was more nerve-racking than enjoyable. My second visit to Duncan would prove even more stressful.


It was the morning of Christmas Eve. Again, Duncan had convinced me to visit them as Lisa for Christmas, and we had a lovely visit. Everything was going well until he said he needed to go to Costco to purchase something. Since I was the card-bearer, the implication was I was to go with him. Costco is about half way between our homes, so the plan was for each of us to drive our own cars and meet in the parking lot. I thought he was crazy for suggesting such an idea, especially on the busiest shopping day of the year. They both assured me no one would know.

“You look fine, dear, better than most of the women who will be there. Just relax, keep your chin up and walk slowly. You’ll do fine.” Those were his wife’s comments as we went out the door.

I remember very little about that trip to Costco—I had tunnel vision from anxiety. I just knew we had to find what he was looking for quickly and make a beeline to the checkout. We were in and out in less than ten minutes—mission accomplished! Back in the parking lot we wished each other Merry Christmas, hugged, and said goodbye.

I don’t remember driving home; I know I felt I was going to puke when I came in the door. It was going to be a long time, a very long time, before I transitioned, I said to myself. Going out in public was so stressful. Yet it felt right on a different and deeper level: the guilt was gone.