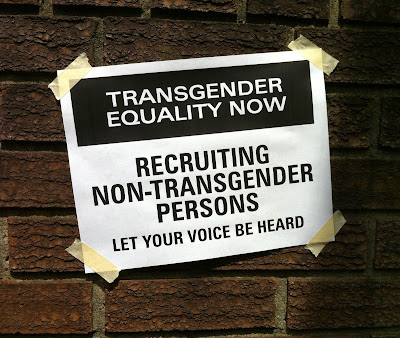 At times I feel like weary, bitchy and annoyed at my world.

It’s easier, if not safer and less painful, to keep it vague and generalized than to think of actual persons in my life. It’s like looking at a large, indifferent audience without trying to make out individual faces for fear I might see my friends in the crowd.

This is what evokes my lament today:

What brought it on was a friend’s innocent question of his Facebook post this morning. He shared an article from The Guardian entitled Church of England to consider transgender naming ceremony  and asked if I had any thoughts.

I was going to start out by saying, “Wow, that is amazing!” Then I remembered this idea is not really new. In fact, it’s been suggested for at least a dozen years. Why has it taken this long? Consequently, my response became more somber—and longer. This is what I said:

In 2003 Justin Tanis published "Trans-Gendered Faith: Theology Ministry and Communities of Faith." In the Appendix, he offers liturgical resources which include Baptism and a Service of Renaming for trans persons who transition.

I agree with you, this is a beautiful idea, and I've heard of this being done in a few places. That the Church of England is considering this is also beautiful, but the reality is that trans people are, for the most part, non-church goers, only 1 out of 14 trans persons attend a church or remain in a church and less than 2 out of 5 identify as Christian, which is less than half of that in the North American general population.

Let’s put this in perspective, when only .3% of the population is trans, and only 7% of them are in a church or hope to be in a church, they are only 1 out of 5,000 persons. But this .3% includes trans people who have yet to come out; so then the question is, how many trans people have come out and transitioned? That is a number that no one knows for sure, but even if we use 50% optimistically, then only 1 in 10,000 persons is 1) trans, 2) has transitioned, 3) attends or hopes to attend church.

Yes, we are a pretty insignificant number to be sure, and perhaps that is why our voices are not heard enough. That is also why it becomes more important for non-trans persons—especially in the church—to speak out on our behalf.

Yet, I wonder how comfortable non-trans persons are in speaking out in defense and support of trans equality? A good test is the "Trans Equality Now" pledge/petition that is circulating on Facebook since yesterday (May 11, 2015). It is meant to be signed and shared. How many of my non-trans friends on Facebook who saw my post have shied away from signing and sharing this pledge/petition because having it on their own wall may offend some of their friends, or they'll have some explaining to do? I'm grateful that as of this writing 22 persons have liked, 13 have commented on my post from 20 hours ago, but only 4 have shared it.

So my point is this: we have a long ways to go before trans inclusion in church and society actually takes hold and becomes the new normal. What the Church of England is considering is pittance, but even that is better than nothing—it expands the conversation. What we need if for it to be shouted from the rooftops.

I fear I’m beginning to sound like a broken record. In my May 13, 2015 blog post I wrote about how trans people are not likely to attend church and explained why. That was preceded by a similar sounding blog post on January 13, 2015. Maybe I need to change my tone. How can I recruit non-transgender persons to join the battle? Would it make it more palatable if I called it “the chorus,” or “the party” instead of “the battle?” No. Unfortunately, it is a battle, lamentably. I won't bore you with examples and all the stats. Only one story: two days ago in “progressive” Vancouver, a transgender woman—a friend of mine—was spat on and elbowed as she walk down the sidewalk minding her own business. It appears the instigator hoped she would fight back, she didn’t. She walked away.

An afterthought three hours after the original post:
We all have down days. This is one of mine. But reading and thinking about all of this in a sad fog, I guess that what I look for is all kinds of change and recognition for trans persons that doesn’t come quickly enough. Like the Green Party wanting to immediately be the next government. It ain’t going to happen. A seat here and there, but a long wait for Big Change. This is not a copout, but you have seen the TG statistics and it’s not that there is a big ‘anti’ movement out there, it’s simply not big on the radar of interest. And I can appreciate that for most people this may be one of many causes nagging at them today.