For me, transitioning was the equivalent of committing career suicide.

My letter to the editor was published in today’s the Province newspaper; it’s reposted below. I wrote it in response to a full-page feature story that appeared in Sunday’s (Nov. 29th) edition, titled ‘There’s a revolution going on.’ 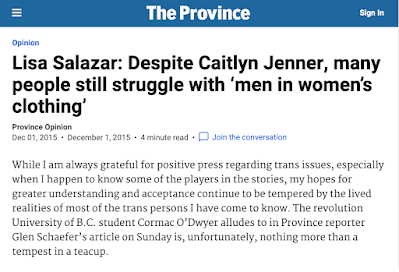 While I am always grateful for positive press regarding trans issues, especially when I happen to know some of the players in the stories, my hopes for greater understanding and acceptance continue to be tempered by the lived realities of most of the trans persons I have come to know. The revolution University of B.C. student Cormac O’Dwyer alludes to in Province reporter Glen Schaefer’s article on Sunday is, unfortunately, nothing more than a tempest in a teacup.

While it is true that Caitlyn Jenner’s coming out caused a 100-per-cent increase in the number of people who claim to know a transgender person (to 16 per cent from eight per cent), being aware that someone is trans does not necessarily mean you embrace and affirm them. It simply means you know they are trans.

Additionally, for most trans persons who have transitioned and are transitioning later in life — let’s say after the age of 30 — dealing with secondary sexual characteristics is not only time consuming, it is also extremely expensive. For many trans persons, it means having to deal with physical and emotional discomfort on a daily basis.

Not every trans woman can afford facial hair removal, for example. In my case, it took 300 hours of painful electrolysis and close to $24,000 over a two-year period. Thankfully, I no longer had to shave. I was still employed at the time and was able to afford it. But this — never mind Jenner’s financial ability — is not the norm for the majority of trans persons.

Compared to the experience of many trans persons, I have been fortunate in other ways. Not only did my family embrace me and my three adult sons allow me into their lives, my friends and clients offered their ongoing support. At least that is how things started out with friends and clients. (Since then I have experienced being ghosted and have seen most of my previous friendships and business relationships grow cold. I tried to be the one to keep relationships alive but my efforts were not reciprocated.)

I transitioned fairly late in life, at the age of 57 in 2008. I struggled for many years not knowing why I felt the way I did. Like many trans persons of my generation, it was not until I was almost 40 before I first heard the word “transgender.’’ This word did not come into use until the late 1980s or early 1990s. Until then, I had “spiritualized” this internal conflict, for which I had no explanation or vocabulary.

In 1999, at the former Gender Clinic at Vancouver General Hospital, I was diagnosed with gender dysphoria and was offered assistance to transition medically and surgically. However, it took me almost nine years to act on the recommended treatment.

I first had to reconcile my faith to what the doctors told me. I didn’t want to trample over my religious faith, but I also didn’t want to park my brain on the shelf by discounting the science. As the devout Christian I had become in the hope of “being healed,” I struggled with incredible guilt and believed that all my internal confusion was simply an attack from the devil.

While it seemed as if my marriage and my freelance graphic-design business were going to survive my transition, my wife asked for a divorce in 2011 and my business gradually dried up. Lamentably, I now find myself severely underemployed; I’m back to living with my 91-year-old mother.

It was in recent conversations with two of my ex-clients that my worst fears were confirmed — transitioning was the equivalent of committing career suicide.

Though Vancouver’s progressive social scene offers one of the safest places for trans persons to transition, the sad truth is that when it comes to employment and business, things are seen through a much narrower lens. Employers and clients worry about the optics of associating or working with a trans person. There is the fear that they will drive business away or make co-workers, clients and customers feel uncomfortable.

If you are a business owner or a recruiter and have a choice between two persons with equal credentials, but one is trans, chances are you will go with the cisgender person. Why risk impacting the bottom line by hiring the trans person? This, sadly, is why so many trans persons continue to be unemployed and underemployed.

North Vancouver counsellor Elizabeth Cooke’s company Inclusivity — which helps businesses, non-profit groups and governments accommodate transgender people — is a much-needed service. But I suggest it will be a long time before trans persons are truly included and allowed to be integrated into society’s fabric. Too many people, while giving intellectual ascent to what it means to be trans, still are not comfortable with “men in women’s clothing,” the default perception, never mind the reductionistic and ignorant restroom debate.

Lisa Salazar is a Vancouver graphic designer, author and photographer.